Behind the Scenes of Sacred Scents 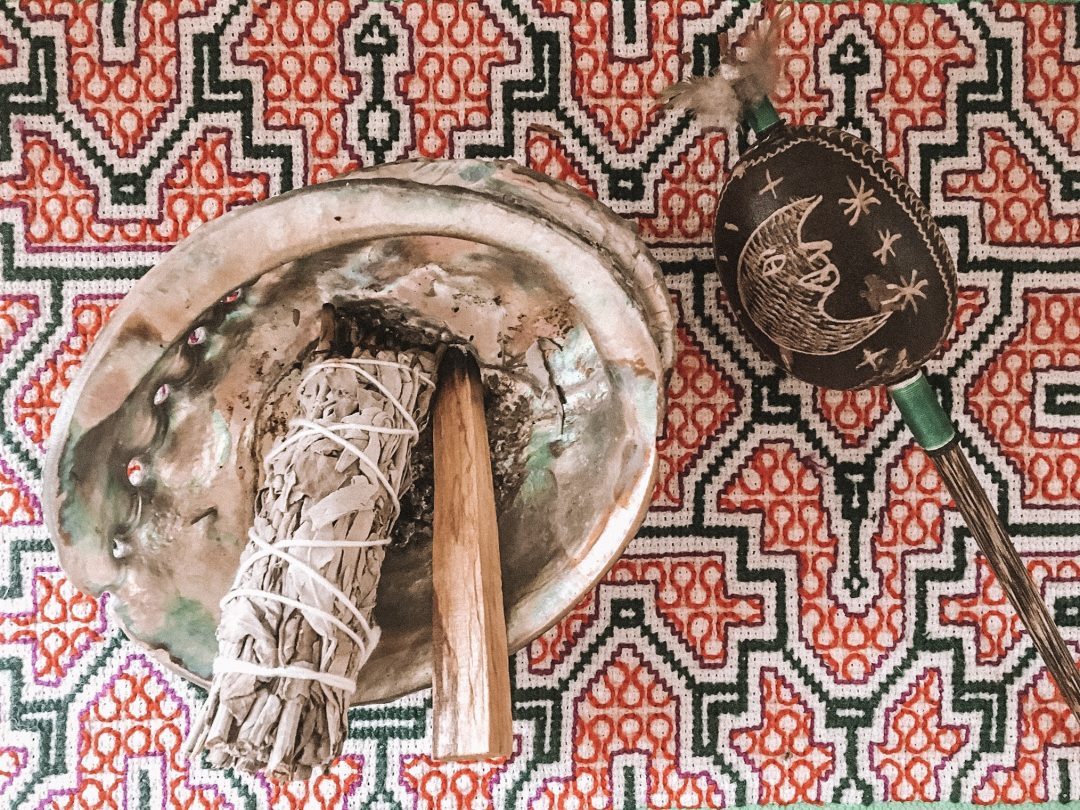 Throughout history and within various cultures of the world, scents have played an important role in ceremony, sacred ritual and prayer. In their various forms and modalities, sacred scents are generally used to raise vibrations, dispel negativity, and assist with healing and spiritual work.

We create sacred scents in various ways, including burning (like burning a stick of palo santo, incense or concentrated tree sap resin), smudging (taking a bundle of dried herbs such as sage or tobacco leaves, lighting them and letting them smolder), and spraying (whether through the mouth of a shaman or through a spray bottle).

Scents can be used in meditation, therapy and ceremony, but also as simply as a deodorant or an insect repellent. In many religions, including Catholicism, Buddhism and Hinduism, the smoke from incense symbolizes prayers rising to heaven and is considered an offering. Shamanic traditions burn specific plants, trees and herbs to purify space and clear negative energies, and use colognes to ground and balance in the energetic field. In parts of Eastern Asia, incense is used as a timekeeper for meditation and prayer, as different incense burns at different rates, ranging from minutes to months. On a practical level, burning palo santo wood or incense made from citronella or neem act as an effective and natural insect repellant.

So why do we use scents for sacred space? Scents bring up strong memories and associations, which is important as we navigate through the ritual process. They are also thought to have psychological benefits, creating a soothing effect on the mind, and perhaps they can even help us to connect with the divine realms. When the mind is able to relax, we can perform rituals with better clarity.

Incense: it goes way back

The first recorded use of incense was by the Egyptians in the Fifth Dynasty, between 2345 and 2494 BC. It later became commonly used in China, Japan, SE Asia for religious ritual of Buddhists, Taoists and Shinto in order to purify space and bring forth bodhisattvas and higher spirits. The ancient Vedic texts of Hinduism mention the use of incense for masking odors, but modern Indian incense was derived by medicinal priests of Ayurvedic lineage for use in healing rituals. 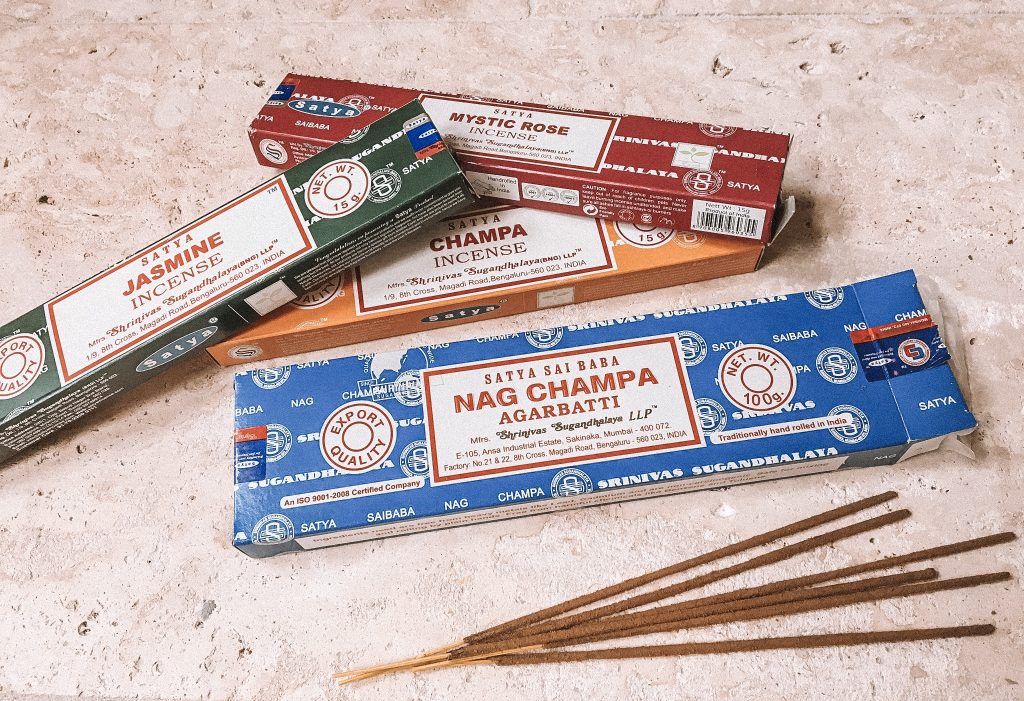 Incense in its many forms

Incense can be found in the form of cones, sticks, rope and resin. Incense cones were invented in Japan and are one of the types of incense used in Kōdō, meaning “The Way of Fragrance,” or the art of appreciating incense. The other type is by heating or smoldering small pieces of fragrant wood. Kōdō is considered a classical art, along with tea ceremony and flower arrangement.

India is the world’s largest producer of stick incense. Paste made from charcoal dust or sawdust is rolled onto bamboo sticks and scented with perfume or essential oils. Tibetan incense, made in Tibet and northern parts of Nepal and Bhutan, has a distinct earthy and herbaceous aroma, and is made with 30 or more natural ingredients. Unlike Indian bamboo stick incense, Tibetan incense is typically found in ropes or coils. Authentic Tibetan incense originates from monasteries, adhering to traditional methods unique to Tibetan culture.

Although there are an unending variety of incense scents such as jasmine, patchouli and sandalwood, to name a few, Nag Champa is one of the most well-known incenses in the world, popularized in the west in the 60’s and 70’s when musicians such as Bob Dylan and the Grateful Dead incorporated it into concert settings. The unique scent is derived primarily from the champaca flower, halmaddi and sandalwood. Cultivated as a sacred plant, the champaca can be found throughout India, Vietnam, and parts of China. It is considered to be sacred to the Hindu god Vishnu and is traditionally burned for meditation ceremonies.

Resin incense comes from refining or extracting sap from trees and plants and is thought to be the purest form of incense. Common sacred scents include pure extract of myrrh, frankincense, benzoin and dragon’s blood. Unlike stick or rope incense, you’ll need a few gadgets to burn resin incense, which includes charcoal rounds, resin burners and sand.

I first came across palo santo during an Ayahuasca ceremony and I found the smell to be remarkably pungent and disturbing. As the shaman passed by, fanning the burning embers of the wood with his chapaka, the overpowering smell made me nauseous. I later read that if you have an aversion to palo santo then it means it is purifying you. I now have come to terms with the scent and find that it has a sweet campfire aroma to it. Perhaps then, it’s done its job in purifying me. 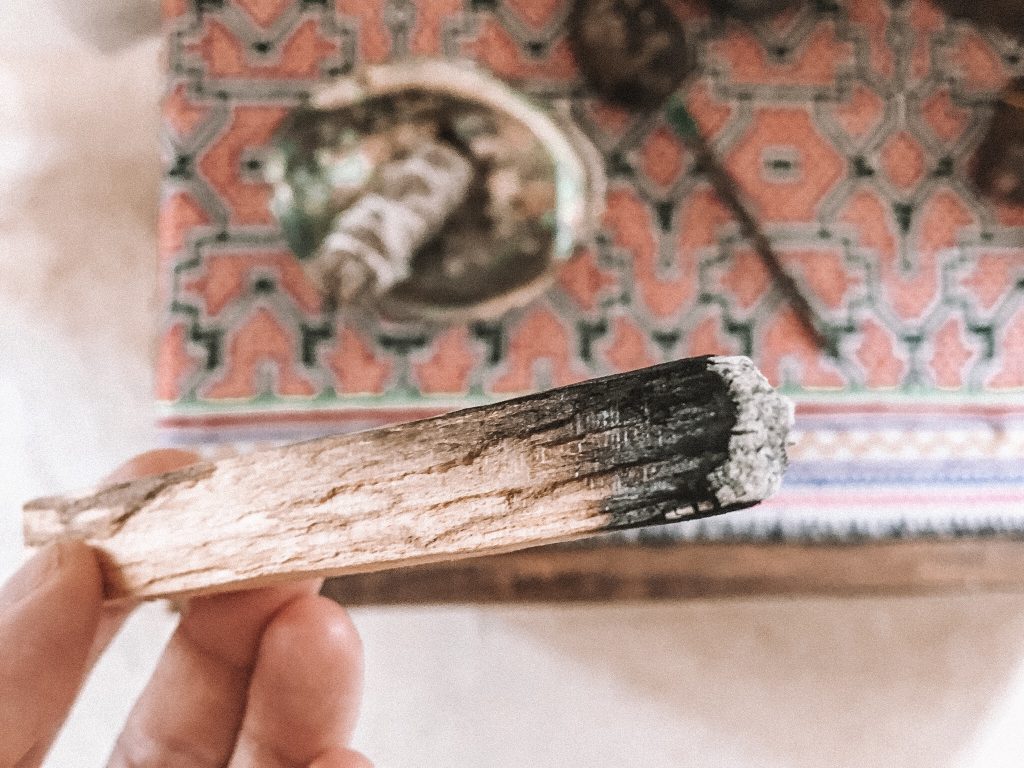 Palo santo, meaning “holy wood” in Spanish, is derived from the palo santo trees of South America. The burning scent of the wood is said to have cleansing properties and healing energy. It’s also a great mosquito repellent and is often used as such in the insect-laden jungle regions where it’s native to.

One of the special things about palo santo, is that because it is considered a sacred tree in South America, it is protected. The tree is only allowed to be harvested after it has fallen on its own and laid on the ground for several years, in doing so, it increases the natural oils and resin.

Bundles of dried sage tied together with twine are used to clear energy and for protection when creating sacred space. Sage was traditionally used by native people of North America, predominately in the deserts of the Southwest US and Northern Mexico. White prairie sage and salvia sage contain thujone, which is mildly psychoactive and is thought to enhance intuition through spiritual ritual. It also has antimicrobial properties, removing bacteria from the air.

Sage is thought to clear all of the energy, both good and bad, making way for the shaman to create the energy. It is used to clear larger spaces because it burns longer. Palo santo on the other hand, is thought to clear only the negative energy. It doesn’t burn as long, so it’s best for clearing your alter or yourself, opposed to larger spaces. If you are clearing a room with palo santo or sage, be sure to open a window to let the negative energies out.

Originating from New York in the early 1800’s, Agua de Florida, or simply Florida Water in English, is an American version of Eau de Cologne. It has since made its way into shaman circles of South America and is popularly used in ceremony space. Its unique tropical floral aroma comes from a variety of citrus including lemon, neroli orange blossom and bergamot, with spicy notes of lavender, cinnamon and cloves. A shaman will sip some of the cologne into their mouth and, with intention, spit spray the cologne onto a person’s energetic field. It can also be applied topically during Ayahuasca ceremonies. Shamans place the cologne on participant’s hands and energy centers, namely on the third eye, which is thought to enhance stronger visions.

In addition to Agua de Florida, there are now various types of ceremonial sprays and colognes available on the market, including palo santo and sage sprays (if you want to skip the smoke), or mixtures of various elements which can clear and protect your ceremony space. 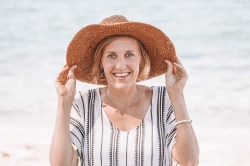 Mariah Laine Moyle is a shamanic energy medicine practitioner, yoga teacher and writer living in Nassau, The Bahamas. Her writing has evolved from Bahamas-specific travel writing, which included publishing the first edition of Moon Bahamas travel guide, to wellness articles and blogs, and a memoir on her healing journey she is currently working on. She is passionate about her path as a healer and is dedicated to bringing these ancient shamanic and yogic teachings to the western world through writing and practitioner work. 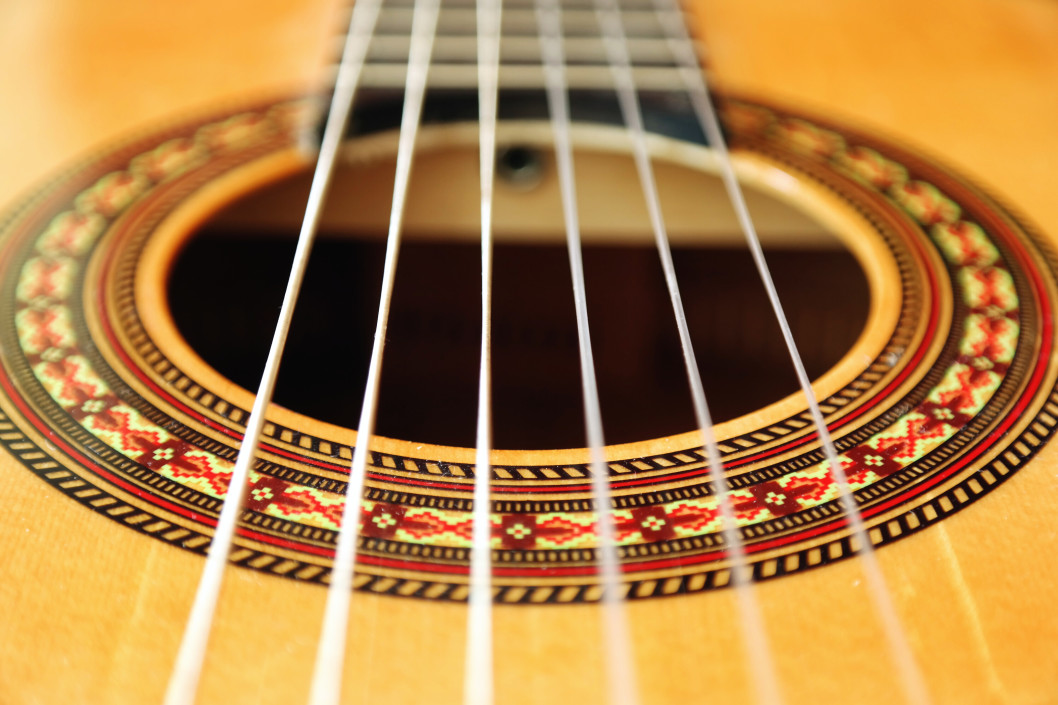 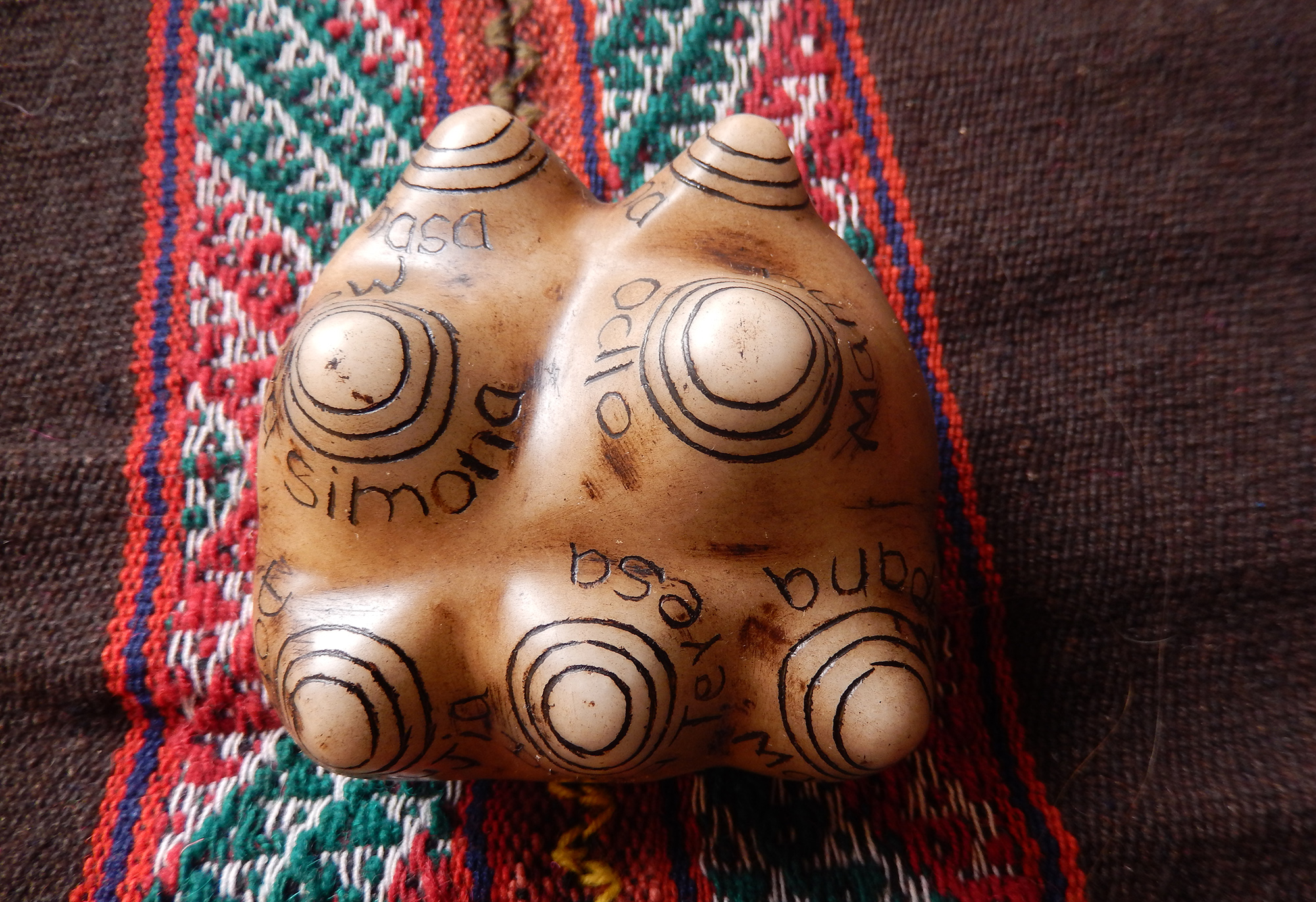 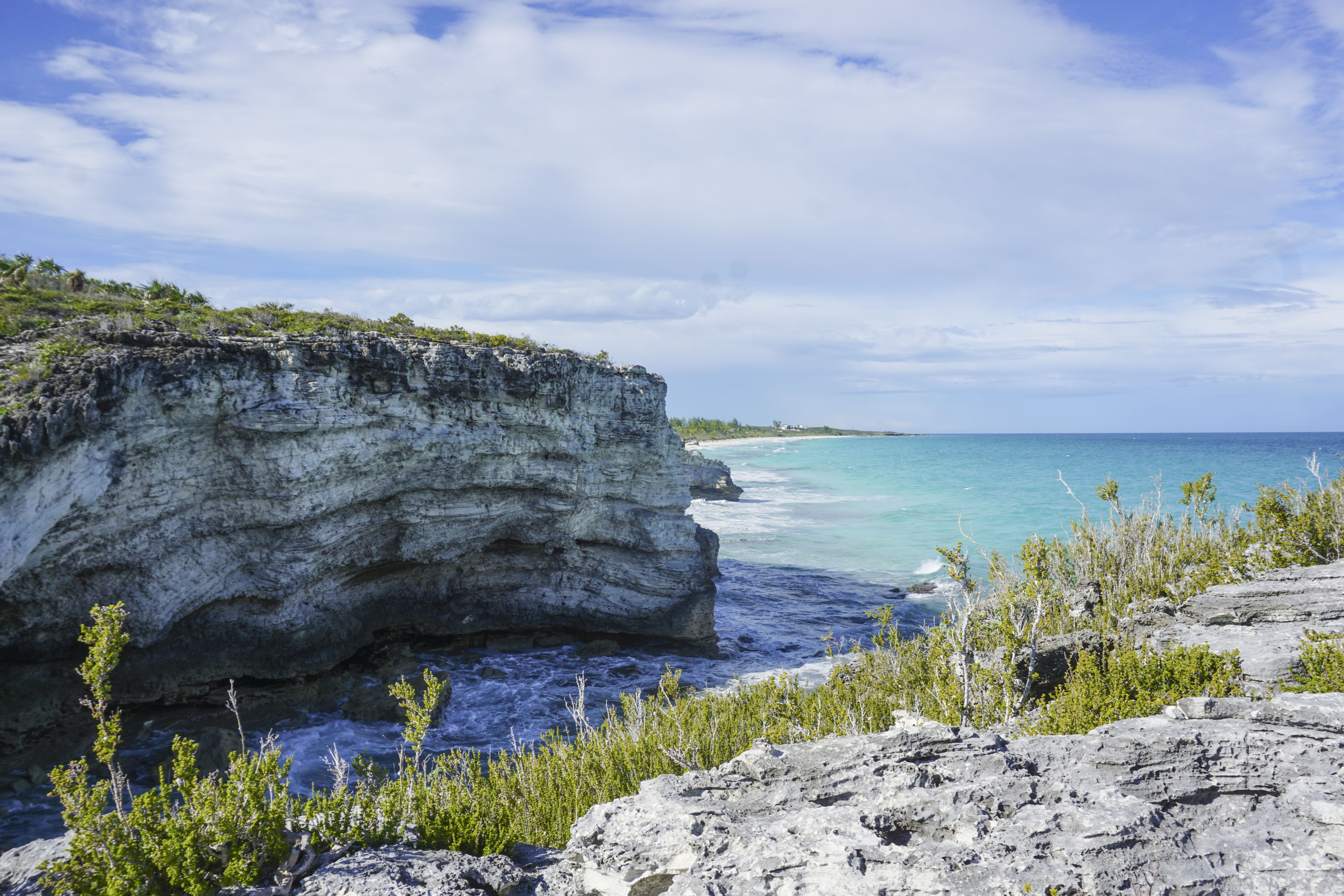 Is this the end of days? The Prophecy of the Eagle and the Condor